There is no time in tennis history that compares to what tennis (or the world, for that matter) is going through right now. The World Wars were the only other time where multiple Majors were suspended for an extended period of time. In this post we look at the slam winners in the 10 years before and after World War I and II and consider what history might tell us about the difficulty of coming back from the public health war against COVID-19.

The sudden disruption that the COVID-19 pandemic has had on lives around the world is causing many of us to look to history for some guidance on what is to come. For the tennis fans who are lucky enough to have the suspension of the tours as their greatest worry at the moment, it means looking to previous long interruptions of the tennis season.

Few events have brought sport to its knees. The only comparable break happened for several years during World War I and II. 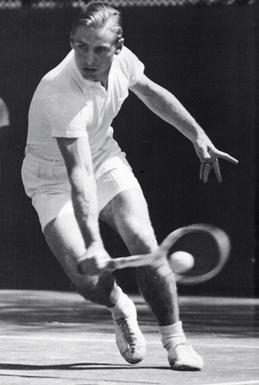 More than a century separates us from the interruptions caused by the Great War, which resulted in three of the four Major tournaments to cease operations for multiple years. The disharmony among events, one of the few constants in tennis history, meant that they didn’t have a coordinated response. The US Open, in fact, held events in every war year.

That pre-Open Era of tennis has little in common with the industry that professional tennis has become. But it is still of historical interest to see what the highest level of the sport went through during the only other time in its past when it faced a tremendous crisis.

I’ve tried to convey some of that impact with a timeline of the men’s Grand Slam winners in the 10 years before and after the wars. By looking pre and post, I am trying to get a sense of how many careers might have been cut short by these long breaks.

Looking at the First World War, we see four players whose lives were lost during the 1915-1919 period: Laurence Doherty, Anthony Wilding, Ernie Parker and Arthur O’Hara Wood. Wilding, a New Zealander, and Australians Parker and O’Hara Wood, all lost their lives in service for their countries; the ultimate sacrifice.

Among the other men who won slams in the years just before the Great War, none claimed another title at any of the Majors in the post-war years. For some rare players, like William Johnston, who rose to the top of the game during wartime, it was possible to continue that success even beyond 1919.

We find a similar story for the players whose careers overlapped with the hiatus during World War II. Henner Henkel and Joe Hunt were the slam winners whose lives were taken by the war; Hunt a little more than a year after defeating Jack Kramer in the finals of the 1943 US Open.

Two positive exceptions among the pre-WWII group of players were: Adrian Quist and John Bromwich. Quist, an Australian won the Australian Open in three years before during and after the war (1936, 1940, and 1948). Countrymen Bromwich had a similar trajectory, winning AO titles in 1939 and 1946.

Competition during the amateur era was nowhere near the level of modern tennis. This makes the lack of comebacks among these historical players that much more stark. If this lookback into tennis most difficult periods tells us anything it may be that a hiatus of this magnitude will have both real and figurative casualties. Let us hope it is a period that no sport ever has to go through again.